In the offline world, authorities can request and obtain documents necessary to investigate a crime within their own country, but electronic evidence is stored online by service providers often based in a different country than the investigator, even if the crime is only in one country. Some data may even be stored in multiple locations.

Evolution of number of Member States' requests to the main service providers (based on transparency reports of Facebook, Google, Microsoft, Twitter and Apple) 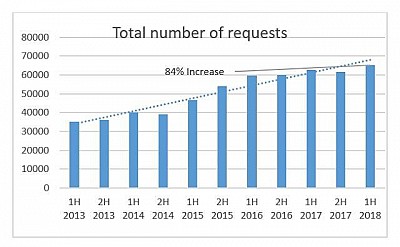 What are the current arrangements in place between the European Union and the United States of America?

The U.S., where the largest service providers are headquartered, is today one of the main recipients of Mutual Legal Assistance (MLA) requests for access to e-evidence from EU Member States. An agreement on Mutual Legal Assistance between the EU and the U.S. was signed on 25 June 2003 and entered into force on 1 February 2010. While this agreement is a key transatlantic mechanism for ensuring effective cooperation in the field of criminal justice and combatting organised crime and terrorism, when it comes to electronic evidence procedures often prove to be too cumbersome and slow.

Why is it necessary to open negotiations with the US on access to electronic evidence?

While the European Union's electronic evidence proposals focus on service providers operating on the EU market, many of them are based outside of the EU, which may result in conflicting legal obligations. The United States is headquarters to some of the largest internet service providers that store electronic evidence and which operate in the U.S. jurisdiction as well as in the EU. Today's mandate seeks to address any conflicts of law, in line with the principle of international comity and the approach set out by the Commission in April 2018. It would include common rules with specific safeguards to allow the data to be transferred. It should reduce the risk of fragmentation of practices and legal rules and enhance legal certainty when obtaining electronic evidence in criminal proceedings.

An EU-U.S. agreement would also significantly speed up procedures and ensure efficient prosecution of criminals in the digital age. While acquiring e-evidence via Mutual Legal Assistance takes on average 10 months, under a bilateral agreement based on the Commission's e-evidence proposal it would only take 10 days. This is not only important to save time but also to secure the evidence as electronic evidence can be more easily moved or deleted than other forms of evidence.

More questions and answers on the mandate for the EU-U.S. cooperation on electronic evidence can be found here.

The EU is working towards beginning formal negotiations on an EU-U.S. agreement to facilitate access to electronic evidence in criminal investigations.

The topic has become such an important one that there will be special session on the access of electronic evidence across borders in the upcoming 7th Europol-INTERPOL Cybercrime Conference to be held at Europol’s headquarters in The Hague on 09-11 October 2019. EVIDENCE2e-CODEX is honored to be part of this session focusing on the practical implementation of the exchange of cyber-investigation information between organisations and across borders using CASE.